HomeAbout Us About the Principal 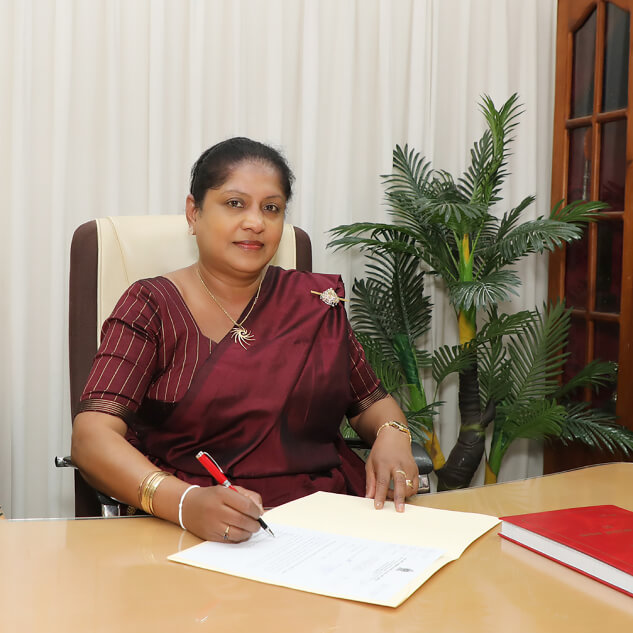 Mrs Maheshika Rupasinghe, an illustrious old girl from Pushpadana Girls’ School in Kandy, holds an MSc degree in Science Education and a BSc degree in Science from Peradeniya University, and a Postgraduate Diploma (Hons.) in Education. She possesses ample experience in academia as well as in education administration.

In her school days, Mrs Rupasinghe - an all-rounder student of rare talent, excelled in academics, sports, aesthetics, and co-curricular activities and brought fame and glamour to her Alma Mater competing & winning at all-Island level. She was also the deputy head prefect and the deputy leader of the school’s Oriental Band. She is well-versed in Russian Language and has obtained a Distinction in Russian Language program conducted by the Russian Cultural Center in Colombo.

Hailing from a leading Buddhist family in the hill capital Kandy, she received her Dhamma education at the Getambe Sri Amarawansa Dhamma School, and won four Presidential Awards for Abhidharma and three other subjects at all-Island Dhamma School Day competitions among many other notable accomplishments. She also served as a teacher at same Dhamma school teaching Abhidarma in Sinhala and English medium for over twenty (20) yea

In her study of Buddhist culture, she drew profound inspiration from her father and veteran journalist Upali Rupasinghe as her role model. He was the former editor of Mahabodhi monthly Journal published by Mahabodhi Society of India, where the great Anagarika Dharmapala was the founder and the first General Secretary of the same. He had made an enormous contribution to the Indian Mahabodhi Society as a resident member from 1990 to 2017. He was also a pioneer member in establishing Anagarika Dharmapala Museum in Saranath- India in 1991 to commemorate the centenary of the Mahabodhi Society of India.

She embarked on her distinguished career as an educationist in 1992 by joining the Sri Lanka Education Service as an English trained teacher at Kdy/Rahatungoda Tamil school in Hewaheta. In 2006, she excelled in Sri Lanka Educational Administrative Service (SLEAS) examination and received further training specially designed for SLEAS officers at Sri Lanka Institute of Development Administration (SLIDA), National Institute of Business Management (NIBM) and Leadership Training at the Educational Training Center at Meepe.

From her humble roots as a teacher, she rose through the ranks to the Sri Lanka Education Administrative Service - Class 1. Her exemplary track-record includes holding the office of Deputy Principal, of Principal and later on of the Director of Education – Zonal Education Office in Kandy.

She commenced her SLEAS career as Class III - SLEAS officer and was appointed as the deputy Principal of Viharamahadevi Girls’ School – Kandy in 2007 and joined Swarnamali Girls School – Kandy in February 2009 in the same capacity before taking over as its Principal. She completed her tenure in March 2012.

She also joined the University of Peradeniya as a visiting lecturer of the Faculty of Education for the Masters’ Degree in Education and the Post Graduate Diploma in Education programs.

The Department of Education for Kandy District also assigned to her an important responsibility for co-coordinating the Social Cohesion and Peace Education Initiative. ‘’Denuwara Mithuro’’ and “Senehasaka Thaksalawa” were the national level programs executed by Mrs Rupasinghe to inculcate harmony, cohesion and peace among Sinhala and Tamil students, which gained national recognition. Uplifting the standards of the Kandy Student Parliament program from the Zonal Educational level to the National level is another notable achievement by her.

She served as the subject Director on Social Sciences, Library & Information Sciences and “Mother Sri Lanka” national program and also as a resource person at the National level on Library and Information Technology for the National Library and Information Center. As the co-coordinator of Kandy Zonal Education office for the national program to get school children to write books known as “Ratak Watina Pothak” she managed to get a record-breaking 5000+ books written by children in her education zone compared to the number of books written by the students in the other zones nationwide.

Apart from the aforementioned academic qualifications, she has followed a Human Resource Management Course at SLIDA, an Entrepreneur Development Course at NIBM, a Research Methodology Course at SIBA open University, an MS Office at ICTA Institute (Nanasala), an e-citizen course at ICDL & ECDL Institutes, and a School Library Course at NILIS – Colombo University.

Her research contributions include the paper on ‘Possible Answer to the Emerging Monkey Menace in Kandy’ as part of the research for her MSc degree from the University of Peradeniya. She has also conducted a study on “Short Term Recall Memory” of school children on zoonotic diseases.

Her superiors and peers who have evaluated her tremendous contribution to the Education sector have especially commended her for the following accomplishments.

She also created history as she joined Dharmapala Vidyalaya – Pannipitiya as its first lady Principal in its 80+ year rich colorful history.